View a video that describes the Governing Board's role in setting policy for NAEP through the lens of four members, who describe how their leadership roles inform their service to the Governing Board and help maintain NAEP as the country's gold standard of assessment.

In overseeing The Nation’s Report Card, the Governing Board identifies subjects to be tested, determines the content and achievement levels for each assessment, approves all test questions, and takes steps to improve the reporting of results. The Governing Board is responsible for communicating NAEP results to a wide range of audiences.

Our strategic vision for NAEP is focused on increasing its value as a resource to impact student achievement.

The National Assessment Governing Board is committed to maintaining the integrity and independence of The Nation’s Report Card as a trusted yardstick for U.S. student achievement. The Governing Board works closely with the National Center for Education Statistics, which administers NAEP.

Learn More About the Governing Board

Congress established the Governing Board to ensure that decisions on the content, standards, and reporting of NAEP are made independently of the U.S. Department of Education. The NAEP law states that the Governing Board shall exercise “its independent judgment free from inappropriate influences and special interests … independent of the Secretary and other offices and officers of the Department.”

Governing Board members represent a range of backgrounds. Membership must, by law, include two state governors, who may not be members of the same political party, and two state legislators, who must also belong to different parties. The other members are selected on a nonpartisan basis.

As specified in Public Law 107–279, the Governing Board’s responsibilities include:

An incumbent member who wishes to seek a second term, and who still qualifies in an open category, can request that his or her name be included among the candidates sent to the secretary for consideration. Incumbents may be selected by the secretary for reappointment to a second term. Board members can serve a maximum of two four-year terms.

Learn how to nominate a colleague to serve on the Governing Board. 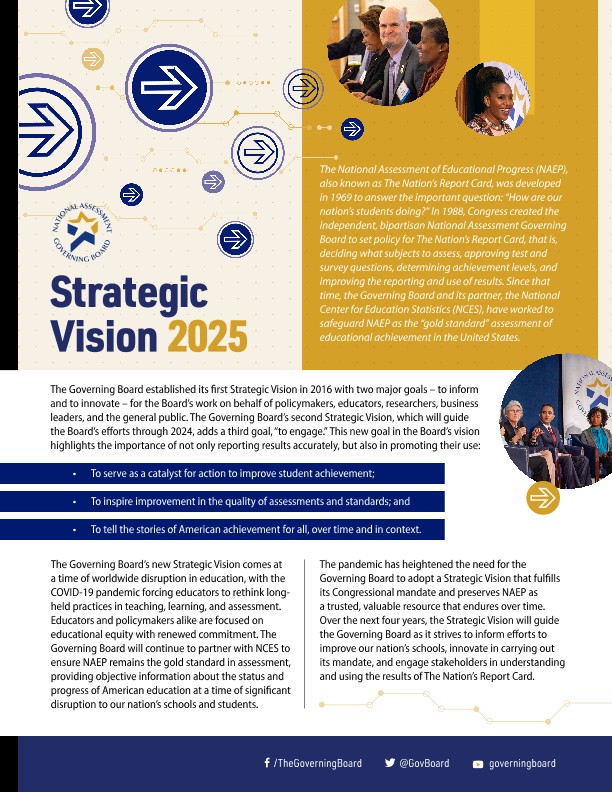