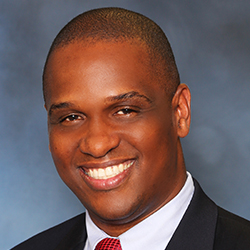 Otha Thornton, president of National PTA, is a senior operations analyst with General Dynamics in Fort Stewart, Ga. He is a retired U.S. Army lieutenant colonel, and his last two assignments were with the White House Communications Agency and United States Forces – Iraq in Baghdad. Mr. Thornton earned the Bronze Star Medal for exceptional performance in combat operations during Operation Iraqi Freedom, 2009–2010.

Previously, Mr. Thornton served on National PTA's Board of Directors, Legislative Committee, Membership Committee, and Executive Search Committee. During his time with Georgia PTA, he served on the board of directors as legislative chair and as an advisory group member for the Georgia Partnership for Excellence in Education.

Mr. Thornton also served Maryland PTA as nominating leader and board development committee chair, and as a member of Anne Arundel County’s Superintendent High Performing High School Task Force. In addition, he was appointed by the governor of Maryland to serve on a Maryland Education Task Force.

Mr. Thornton’s military background allowed him to volunteer throughout the country and the world at various local and council levels. He served as president (and earlier as vice president) of Meade Senior High School PTSA at Fort Meade, Md. He has also been a volunteer at the Kaiserslautern American Elementary and Middle School PTAs, Department of Defense Education Activity, at Vogelweh Air Force Base, Kaiserslautern, Germany; South Range Elementary School in South Range, Mich.; Houghton Elementary and Middle Schools in Houghton, Mich.; Fernandez Elementary School PTA events in San Antonio; and Richmond Hill Elementary School events in Richmond Hill, Ga.

Mr. Thornton is also active in the community. He is a member of Atlanta’s West End Church of Christ and Alpha Phi Alpha Fraternity, Inc. He is a life member of the National Eagle Scout Association and has more than 25 years of active service in the scouting program across the United States and around the world.