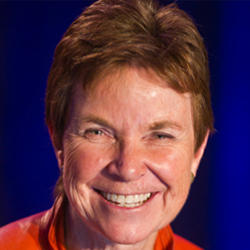 Kati Haycock is one of the nation’s leading advocates in the field of education and serves as president of The Education Trust. Established in 1996, The Education Trust works for the high academic achievement of all students at all levels, prekindergarten through college. The organization’s goal is to close the gaps in opportunity and achievement that consign too many low-income students and students of color to live on the margins of the American mainstream.

Known for years as a powerful force on education policy, The Education Trust is often described as “the most important truth teller” in American public education. The organization also works hand in hand with educators and civic leaders in their efforts to transform schools and colleges into institutions that serve all students well.

A native Californian, Ms. Haycock founded and served as president of The Achievement Council, a statewide organization that provided assistance to teachers and principals in predominantly minority schools in improving student achievement. She also served as director of outreach and student affirmative action programs for the nine-campus University of California system.

Ms. Haycock speaks about educational improvement before thousands of educators, community and business leaders, and policymakers each year. She has received numerous awards for her service on behalf of our nation’s youth, and serves as a director on several education-related boards, including the Carnegie Foundation for the Advancement of Teaching, The New Teacher Project, and The Hunt Institute.