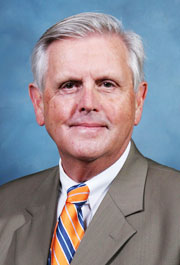 Terry Holliday, Ph.D., was selected as Kentucky's fifth commissioner of education in July 2009.

Holliday served as superintendent of the more than 20,000-student Iredell-Statesville school district from 2002 until 2009. Under his leadership, the Iredell-Statesville school district received the 2008 Malcolm Baldrige National Quality Award, which was created by an act of Congress in 1987 to recognize companies, organizations, businesses and other entities that have shown long-term improvement in quality and productivity.

In December 2010, Holliday was named to the board of directors for the Council of Chief State School Officers (CCSSO).  CCSSO is a nonpartisan, nationwide, nonprofit organization of public officials who head departments of elementary and secondary education in the states, the District of Columbia, the Department of Defense Education Activity and five U.S. extra-state jurisdictions.

Holliday is the co-author of Running All the Red Lights: A Journey of System-Wide Educational Reform.

A native of Belton, South Carolina, Holliday and his wife, Denise, are the parents of two children.