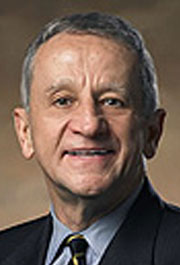 Dr. Pascal (Pat) D. Forgione Jr. was appointed Distinguished Presidential Scholar and Executive Director for the K–12 Center at ETS in July 2009. His career as an educator and educational administrator is extensive.

From 1999–2009, Forgione served with distinction as Superintendent of the Austin Independent School District (Texas). Previously, from 1996–1999, he was U.S. Commissioner of Education Statistics for the National Center for Education Statistics, a federal agency. From 1991–1996, he was Delaware State Superintendent for Public Instruction. In 1991, he served as the first Executive Director for the U.S. Department of Education's National Education Goals Panel.

Forgione has also served as a consultant to, or member of, numerous educational organizations and initiatives, including: the Council of Chief State School Officers; the Council of the Great City Schools; the National Governors Association; U.S. Department of Education; U.S. Department of Defense; National Science Foundation; the College Board; RAND Corporation; American Education Research Association; and the National Council for Measurement in Education.

In 2008, Forgione received the Richard R. Green Award as the National Urban Educator of the Year from the Council of the Great City Schools. In 2009, he was selected as the Austinite of the Year by the Greater Austin Chamber of Commerce.