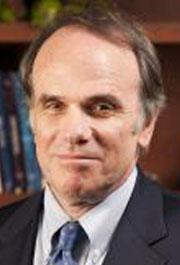 Title line one
Dean of the Graduate School of Education and Human Development, George Washington University

Before joining GSEHD in Fall 2010, Dean Feuer served as the executive director of the Division of Behavioral and Social Sciences and Education in the National Research Council (NRC) of the National Academies, where he was responsible for a broad portfolio of studies and other activities aimed at improved economic, social, and education policymaking.

He was the first director of the NRC's Center for Education and the founding director of the Board on Testing and Assessment. Before joining the NRC in 1993, Feuer was a senior analyst and project director at the Congressional Office of Technology Assessment. He holds a Ph.D. in Public Policy from the University of Pennsylvania and an MA from the Wharton School, and studied public administration at the Hebrew University of Jerusalem and political science at the Sorbonne. Feuer grew up in New York City, where he attended public school and graduated cum laude from Queens College (CUNY) with a major in English literature and journalism. While at Queens he was the campus "stringer" for the New York Times and editor of one of the two major student newspapers.

Upon earning his doctorate, Feuer remained at Penn, teaching graduate seminars in education and working at the Higher Education Finance Research Institute, where he specialized in studies of firm-sponsored training. He then joined the faculty of the business school at Drexel University, teaching courses in public policy and management and continuing his research on the economics of human capital.

Feuer was the Burton and Inglis Lecturer at Harvard University in 2004–05; this book is based on those lectures. Feuer's articles and reviews have been published in economics and policy journals, as well as in the New York Times, the Philadelphia Inquirer, and other newpapers. He was elected to the National Academy of Education in 2003.

Feuer lives in Washington, D.C., with his wife, Dr. Regine B. Feuer, an obstetrician-gynecologist. The Feuers have two grown children.