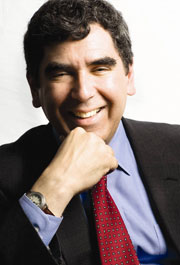 Ben Wildavsky is a senior scholar in Research and Policy at the Kauffman Foundation. A prize-winning journalist and author, he previously spent 18 years specializing in education and public policy at U.S. News & World Report, National Journal, and other publications. His most recent books are The Great Brain Race: How Global Universities Are Reshaping the World and a co-edited volume, Reinventing Higher Education: The Promise of Innovation.

Before joining the Kauffman Foundation in 2006, Wildavsky was education editor of U.S. News & World Report, where he was the top editor of America's Best Colleges and America's Best Graduate Schools.  Before joining U.S. News, he was budget, tax, and trade correspondent for National Journal, higher education reporter for the San Francisco Chronicle, and executive editor of the Public Interest. His articles and reviews have also appeared in the Washington Post, the Wall Street Journal, and many other publications. He blogs for the Chronicle of Higher Education's new global edition.

As a consultant to national education reformers, he has written several influential reports, including the September 2006 report of the Secretary of Education's Commission on the Future of Higher Education. In addition to numerous media appearances, he has spoken to audiences at Google, the Economist's Human Potential conference, Harvard, Berkeley, the London School of Economics, the Committee for Economic Development, and many other venues.