WASHINGTON — The nation’s fourth- and eighth-grade students made small gains from 2011 to 2013 in how well they use words to gain meaning from the passages they read, according to a newly released report from the National Assessment of Educational Progress (NAEP), also known as The Nation’s Report Card. The report, Vocabulary Results From the 2013 NAEP Reading Assessment, also shows that one of the biggest gains in vocabulary knowledge was made by eighth-grade Hispanic students, whose improvements have narrowed the achievement gap with white students at that grade level since 2009.

Rather than presenting words in isolation, NAEP’s focus on vocabulary acknowledges that key distinctions and nuances of word meaning arise in the context of particular reading passages. Each vocabulary question asks how a particular word contributes meaning to the reading passage in which it appears.

“A strong vocabulary helps students learn in all school subjects and will help them throughout their lives outside the classroom,” said Terry Mazany, chair of the National Assessment Governing Board, which sets policy for NAEP. “The level of detail in the assessment’s findings, including results on how well students interpret specific words, can assist educators in their efforts to improve students’ ability to understand whatever they are reading.”

According to the NAEP assessment schedule, fourth- and eighth-graders are tested in reading every two years, while 12th-graders are tested every four years. (Twelfth-graders were not tested in 2011, so their 2013 scores can be compared only with the 2009 results.) Vocabulary results from the 2013 reading assessment are based on nationally representative samples of 190,400 fourth-graders, 171,800 eighth-graders and 45,900 12th-graders. Although vocabulary results cannot be reported in terms of the NAEP achievement levels (Basic, Proficient and Advanced), scores can show patterns in results for students performing at lower (10th and 25th), middle (50th) and higher (75th and 90th) percentiles.

Hispanic eighth-graders made relatively large gains since 2009. Their 2013 average score of 252 was 3 points higher than in 2011, and 5 points higher than in 2009. Over the same time period, the average score for white students at grade 8 — the highest-performing group — stayed the same, at 276. As a result, the gap in achievement between eighth-grade Hispanic and white students narrowed from 30 points in 2009 to 24 points in 2013.

All vocabulary questions in the assessment ask about a word’s meaning in the context of passages that students read. For example, in the 2013 assessment, fourth-grade students were asked to interpret the meaning of the word “just” after reading a passage from the story “The Gardener and the Nightingale.”

On page 2, when the man talks about “a just punishment” for the nightingale, he means that

Forty-six percent of fourth-graders correctly selected option D. Forty-five percent chose either option A or option C, which reflect different uses of the word, not its meaning in the story. Nine percent chose option B — a misinterpretation of the context in which the word appears.

As with other vocabulary questions, the percentage of students who answered correctly are reported by race/ethnicity, gender, National School Lunch Program eligibility, type of school, school location, disability status, English language learner status and parental education level at grades 8 and 12.

Sample vocabulary words from the 2013 assessment and the percentage of students at each grade that recognized their meaning are shown in this chart: 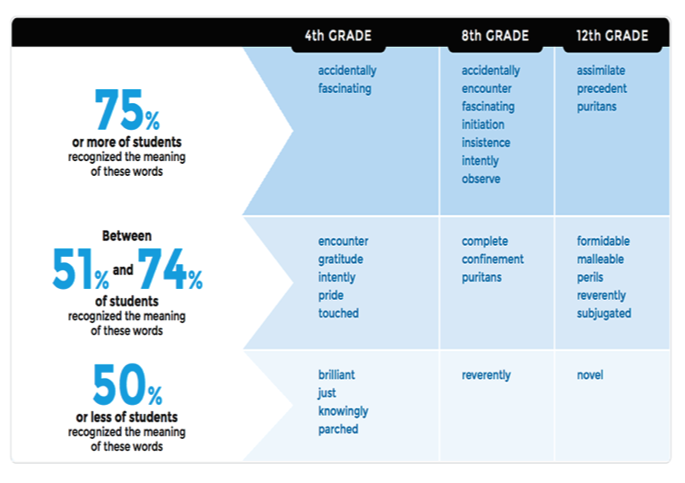 “The ability to apply vocabulary in reading is critical for every boy and girl, regardless of race, ethnicity or socio-economic background,” said Susan Pimentel, the Governing Board’s vice chair. “To that end, we are encouraged by the gains for Hispanic, black and low-income eighth-graders. Nonetheless, the results also show educators, policymakers and the public that there is more work to be done to improve vocabulary and comprehension for everyone.”