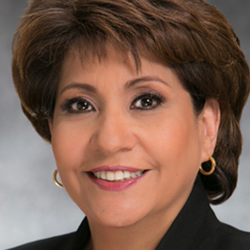 As someone who has experienced the promise of the American dream firsthand, Janet Murguía has devoted her career in public service to opening the door to that dream to millions of American families. Now, as a key figure among the next generation of leaders in the Latino community, she continues this mission as president and CEO of the National Council of La Raza (NCLR), the largest national Hispanic civil rights and advocacy organization in the United States.

Since 2005, Ms. Murguía has sought to strengthen NCLR’s work and enhance its record of impact as a vital American institution. One of her first priorities was to harness the power of the nation’s nearly 50 million Hispanics and improve opportunities for Latino families by strengthening the partnership between NCLR and its network of nearly 300 community-based Affiliates, which annually serve millions of people in 41 states, the District of Columbia, and Puerto Rico.

Ms. Murguía has placed special emphasis on turning Latino growth into empowerment through the Latino vote. In the 2008 election, NCLR, along with its partners, helped to register nearly 200,000 Hispanic voters. Other initiatives and partnerships helped more than 1.5 million eligible immigrants apply for citizenship.

Ms. Murguía has also focused on strengthening NCLR’s relationship with sister civil rights and advocacy organizations. She has spearheaded efforts to build bridges between the African American and Latino communities in conjunction with organizations such as the NAACP and the National Urban League, and was the first Hispanic leader to give the keynote speech at the annual Dr. Martin Luther King, Jr. Unity Breakfast in Birmingham, Ala.

The visibility of Latinos in the media has also been a key concern for Ms. Murguía. Through her efforts at securing a host of new partners and resources, the NCLR ALMA Awards returned to television in 2006 after a three-year hiatus as part of NCLR’s strategy to promote fair, accurate, and balanced portrayals of Latinos in the entertainment industry.

Ms. Murguía is a board member of the Independent Sector, a coalition of leading nonprofits, foundations, and corporations. She is also an executive committee member of The Leadership Conference on Civil and Human Rights and serves on the board of the Hispanic Association on Corporate Responsibility and the National Hispanic Leadership Agenda.

Ms. Murguía has been recognized on numerous occasions for her work. She was featured in Newsweek magazine’s “Women & Leadership” issue, chosen as one of The NonProfit Times’ “Power and Influence Top 50” leaders and one of Washingtonian magazine’s “Washington’s 100 Most Powerful Women,” named to People en Español’s “100 Most Influential Hispanics,” and selected as one of Hispanic Business magazine’s “100 Most Influential Hispanics,” Hispanic magazine’s “Powerful Latinos,” Latino Leaders magazine’s “101 Top Leaders of the Hispanic Community,” and Poder magazine’s “The Poderosos 100.” In 2005, she received the University of Kansas (KU) Law Alumni Association Distinguished Alumna Award.

Ms. Murguía began her career in Washington, D.C., as legislative counsel to former Kansas Rep. Jim Slattery. She then worked at the White House from 1994 to 2000, ultimately serving as deputy assistant to President Bill Clinton, providing strategic and legislative advice to the president on key issues. She served as deputy director of legislative affairs, managing the legislative staff and acting as a senior White House liaison to Congress. She then served as deputy campaign manager and director of constituency outreach for the Gore/Lieberman presidential campaign. In 2001, Ms. Murguía joined KU as executive vice chancellor for university relations, overseeing the university’s internal and external relations with the public, including governmental and public affairs.

Ms. Murguía grew up in Kansas City, Kan. She received three degrees from KU: bachelor’s degrees in journalism and Spanish (1982), and a doctorate in law (1985) from the School of Law.